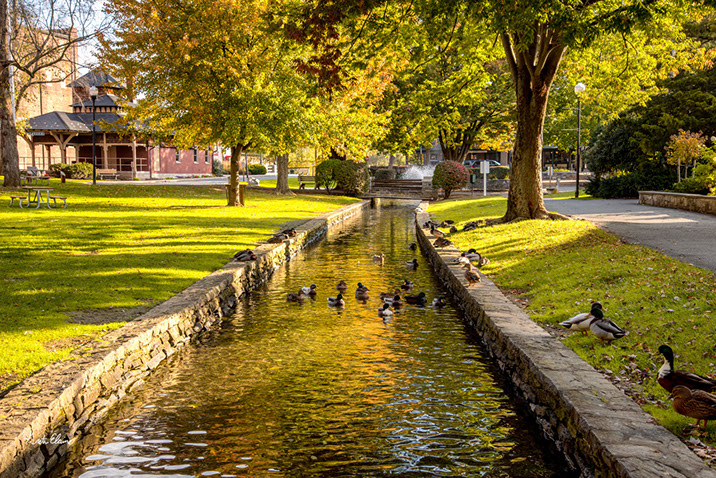 When John George and Anna Klein donated their 491-acre farm to the Moravian Brethren in 1755, title was transferred to Timothy Horsfield as agent for the congregation. The entire property was held communally by the congregation for one hundred years, until the land lease system was ended in 1855. At that time homeowners and others who had built on the land were given first option to purchase the real estate on which their dwellings, barns, and businesses sat.  Gradually over subsequent decades much of the land in Lititz was transferred to private or public ownership.

The Moravian Congregation retained ownership and management of the land near the springs, allowing its use for community gatherings and recreation.  Originally a swampy wetlands, this area gradually was developed into Lititz Springs Park.  On October 29, 1956, the congregation executed a Declaration of Trust transferring management of the Park to the newly formed Lititz Springs Park, Incorporated, a non-profit corporation headed by a Park Board which assumed responsibility for all aspects of running the Park for the benefit of the community.  An Operating Agreement executed between the Board of Trustees of the Lititz Moravian Congregation and Lititz Springs Park, Inc. and most recently updated in 2012 governs the relationship between the two entities.

In December 1993 the ACLU, in response to a complaint regarding the large crèche at the fountain in the middle of the intersection of Broad and Main Streets, challenged the Borough of Lititz for allowing and facilitating an exclusive religious display on public land. The Borough hired Attorney John Pyfer of Lancaster to research ownership of the triangular parcel of land on which the fountain stands and the crèche is displayed. After performing a lengthy and detailed deed search, Pyfer determined that the Moravian Congregation still owns it.  When the streets were dedicated to Pennsylvania as State Routes, the common cartway cutting off the corner around the General Sutter Inn already existed.  As a result, the deeds of dedication described only the land in use for streets, leaving an isolated triangle in the middle. With the transfer of ownership and maintenance of the crèche figures to a community organization and proof that the location was not public but rather church land, the complaint was withdrawn as moot.

This discovery came as unexpected news to Lititz Moravians.  In response, the congregation approved a Declaration of Trust adding the parcel, now formally designated Lititz Memorial Square, to the trust already in existence for the Park. The Operating Agreement was updated to include the new addition.  Thus two tracts in the very center of town, conveyed by farmer Klein and his wife to a small group of Moravians nearly 275 years ago, remain the possession of the congregation they founded.